See the Play on the 29th of March. At Sacred Heart College, Retreat Road, Newtown – Geelong. Register and Get Your Free Tickets!

It’s time to talk about suicide:

A new and engaging production that combines a play about suicide with a panel of mental health experts will connect and bring people together in local communities.

END_OF_DOCUMENT_TOKEN_TO_BE_REPLACED 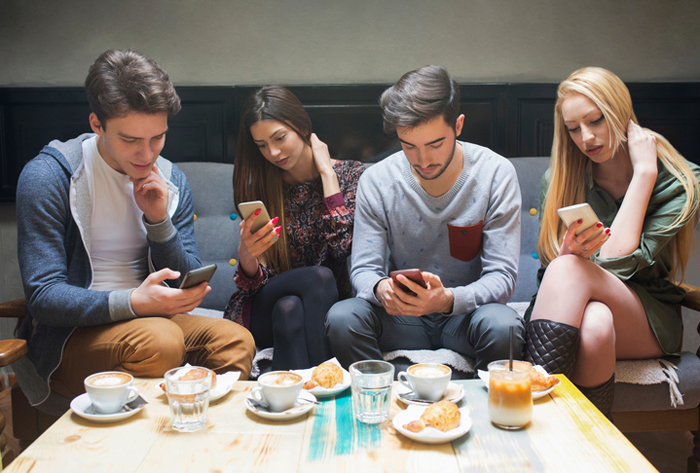 ABC TV journalist Emma Alberici speaks to social psychology expert and Associate Professor of Marketing at New York University’s Stern School of Business Adam Alter and Professor at the School of Computing and Information Technology at the University of Wollongong Katina Michael about how apps are tailor-made to encourage addiction.

EMMA ALBERICI: I’m joined now from New York by Professor and author Adam Alter, he’s the author of Irresistible, the book examining our growing addiction to technology. Katina Michael is here with me in the studio, she’s Professor at the School of Computing and Information Technology at the University of Wollongong, specialising in online addiction. … Adam, how addicted are we to technology? Well, you heard a bit about it earlier on. We are greatly addicted. There was a massive study that was run in 2011, so that’s now some years ago, showing that about 41 per cent of the adult population had some form of behavioural addiction and the suggestion is that now that is probably up around 50 per cent. And Katina, is there a particular demographic or sex that is more vulnerable than another?

KATINA MICHAEL: I think our studies have shown that anyone over 14 and under 55 are as prone, for instance, to smartphone addiction. So we are all copying each other and it looks [like] normalised behaviour and given our parents are using more, children are using more and they are copying and mimicking.

EM: What constitutes addictive technology Adam, assuming it doesn’t include making calls on your phone?

AA: No that’s right, most of what goes on, on screens, so it’s the screen component of the phone that’s so difficult for us to resist. And that’s because screens can deliver all sorts of interesting rewards to us, that draw us in and that keep us engaged over time. So things like games, email, social media, texting is a big one as well. So those are just some of them. There is also shopping. Fitness devices. It’s a pretty big range of behaviours.

EM: And what do you think are the long-term consequences, negative clearly of this addictive behaviour? I mean drug addiction and gambling addictions, we know what those obvious consequences and impacts are. Katina what is the problem with being on our phone so much?

END_OF_DOCUMENT_TOKEN_TO_BE_REPLACED

Some studies say two out of three young people between the ages of 16 and 18 have sexted.

Whatever the precise figures, sexting is very prevalent at an important time in a young person’s development when they are expressing their sexuality – and they are utilising technology to do that.

Sexting is part of being a young person. We are in the iPhone era. A young person has an iPhone or smartphone with them much of the time and it has become part of how they are developing their sexual identity.

We’ve done it through generations with art, the press and by writing risqué things. Every time we have a new technology coming in to the sexual space we get worried. END_OF_DOCUMENT_TOKEN_TO_BE_REPLACED

Here is a brief overview of the most popular social media apps and websites used by kids in Australia. As a parent, some of these you have probably heard of but some you may not be familiar with. It’s important you keep pace with the social media landscape.

Many have tools and functionality that can help parents restrict illicit and inappropriate content from being seen. Most importantly, your kids will be more likely to talk to you about their social media use if you understand the platforms they’re using.

END_OF_DOCUMENT_TOKEN_TO_BE_REPLACED

What does the Australian community find acceptable for media to present to children? What might they be exposed to, and how can you help young people and their families manage the risks? Since my role as Australia’s acting eSafety Commissioner was introduced last year, we’ve created a number of projects and programs to act as a safety net for Australian children online.

I began my career working on documentary films and then moved to a position at the Australian Classification Board. There I saw a range of films, videos, computer games and police and customs seizures that told me a lot about what our society thought was acceptable – and what was not. END_OF_DOCUMENT_TOKEN_TO_BE_REPLACED

In 2004 I wrote a book on the Internet and I made somewhat of a prediction. Call me Nostradamus. In the book I said there was a new world and I called it rather pathetically, Siberia. I said your children were early settlers in this new land and that this was potentially problematic because a lot of parents were standing on a metaphorical dock, waving goodbye to their children as they explored it.

I also said that I didn’t think staying on the dock was a very good idea because in Siberia what looks like a bank can sometimes be a robber. What looks like a friend can be a predator, and what looks like a game could be a trap. These are the pitfalls of the Internet and social media. END_OF_DOCUMENT_TOKEN_TO_BE_REPLACED

Cyber-bullying is illegal in Australia, but working out what aspects are covered and how can be a challenge. Sexting, cyber-bullying and their related offenses are covered by a range of state, territory and federal laws. Some jurisdictions have specific anti-bullying laws, while others use existing laws to prosecute cases.  END_OF_DOCUMENT_TOKEN_TO_BE_REPLACED